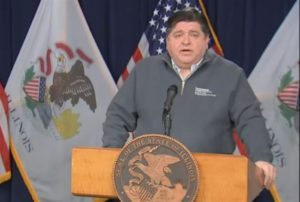 SPRINGFIELD — The state reported more than 10,000 novel coronavirus tests completed for the third day in a row Sunday, leading to 2,126 more positive cases of the virus in Illinois.

Gov. J.B. Pritzker has said that meeting the 10,000 per-day threshold gives medical professionals and state officials a more accurate understanding of COVID-19’s impact on communities across Illinois. In the last 24 hours, 13,335 test results were recorded.

The governor said at his daily briefing in Chicago Sunday that any resident who has COVID-19-related symptoms, as well as first responders who are in any state of health, can receive a test.

The Illinois Department of Public Health announced 59 more lives lost from the virus since Saturday as residents died in six counties. That brings Illinois’ total COVID-19 impact to 43,903 confirmed cases in 96 of 102 counties and 1,933 total deaths.

Of the 4,595 COVID-19 patients hospitalized in the state as of midnight Sunday, Pritzker said, 1,267 are in an intensive care unit, with 772 on ventilators.

Social distancing remains an important prevention strategy. By standing in large groups not wearing masks, “you’re literally putting everyone around you in danger,” the governor said.

In response to reports of a large party in the Chicago area, he added those who refuse to shelter at home “have violated not only the intention of the order that we’ve put out, but also they’ve violated the trust of their friends and family.”

Local law enforcement has the authority to enforce the orders. Pritzker said he asked police departments to first remind residents who are not social distancing or wearing a mask that they must do so. If residents refuse, officers can arrest them for reckless conduct.

When questioned about schooling in the state, Pritzker said school administrators and teachers should spend time this summer preparing for in-person education and improving their e-learning curriculum.

“It is still unclear what things will look like over the summer and the fall,” he said. “But without knowing the answer, e-learning is an important thing for us to develop either way.”

Pritzker said the pandemic highlighted how many districts were unprepared to administer e-learning. In response, the State Board of Education has financial resources available to assist them in bulking up their programs.

“I think that in the future, we’ll be using e-learning more and more, even in the absence of a pandemic,” the governor added.

State Revenues: Pritzker was also asked about the state’s fiscal shape at the brief news conference and said lost revenues will present a “real challenge” for next fiscal year’s state budget. When he made his initial proposal in February, it was “balanced” upon the money officials expected the state to receive, but COVID-19 has made those estimates obsolete.

“I do think that we’re looking at all the areas in which there may be a need to make cuts or changes to our state budget in order to make it balanced,” he said.

Fitness Centers: Before gyms can reopen, Pritzker said when asked, owners must develop a system to ensure the safety of employees and customers.

“You would have to have a lot of staff, frankly, to wipe down everything on a constant basis to make it sanitary for people, and I know that’s extremely difficult,” he said. “Equipment gets dirty with fluids that come from people, and I think it would be just an extraordinary undertaking, but it would be necessary if we were to reopen those.”

Pritzker said “the courts need to follow through on this,” because similar actions were taken in response to flooding incidents.

“The obvious answer to this, frankly, is that the governor has the authority to issue a disaster proclamation and put in place executive orders that are all about saving lives,” he said. “…Obviously, this has threatened the lives of 12.7 million people in the state.”