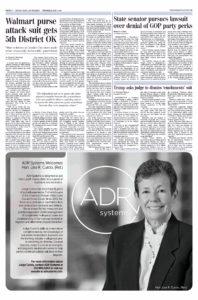 The Chicago Daily Law Bulletin published this piece in print on Wednesday, May 02, 2018. The jump is below.

Published by the Chicago Daily Law Bulletin on May 02, 2018

SPRINGFIELD — Republicans have claimed that state Sen. Sam McCann, who launched a third-party bid for governor this month, is “being used” by Democrats, setting him up to split GOP votes in November. As punishment, the caucus withheld his access to taxpayer-funded staff resources.

But McCann, a Republican from Plainview, asserts he still has a constitutional right to party assets such as GOP photographers, bill summaries and web pages. And he is asking a federal judge to weigh in on the matter.

McCann filed a lawsuit this week alleging the suppression of resources is a breach of First and 14th Amendment protections under the state and federal constitutions.

His five-count claim, filed in the Northern District of Illinois on Tuesday, argues his freedom of speech, freedom of association and due process rights were violated by Republican leaders after he announced his bid to square off in the governor’s race as a third option. 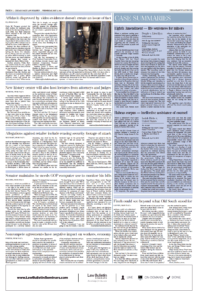 He also alleges the GOP unfairly retaliated against him, citing the First Amendment’s shield against state prohibitions on political speech.

Dale D. Pierson, general counsel for Local 150’s legal department, which represents McCann in the matter, said today his client is “out there blind” without those party resources.

The minority caucus cut McCann’s access to administrative staff support and “locked” McCann out of computer programs that would enable him to monitor the status of legislation and read budget-related materials, he said.

“They’re depriving Senator McCann and his constituents of adequate and proper representation at a time when it is critical to all of the people in the state of Illinois,” Pierson said in an interview. “Senator McCann has 20-some-odd bills that he’s sponsored that are in the various stages of the legislative process that he can’t properly manage without the resources that are supposed to be provided to all senators.”

The 19-page filing claims that legislative leaders, based on powers derived from the Illinois Constitution, control millions of dollars each year for official expenditures. This year, that appropriation was roughly $5.2 million.

Denying McCann, who has been elected three times to the Senate as a Republican, the benefits of that money because he announced a split with the caucus to run as a “Conservative Party” candidate, is a freedom of speech issue, the lawsuit claims.

“Plaintiff McCann’s participation in the minority caucus, and access to the taxpayer-funded legislative resources — which are available to every other member of the Senate — are vital to his ability to represent effectively the constituents of the 50th Senate District. The First Amendment protects against [s]tate prohibition of political speech and, conversely, [s]tate punishment or penalty for the exercise of free speech rights, especially where the [s]tate’s action infringes upon the political speech of a duly elected legislator in his capacity as such,” the suit claims.

The suit also states that by withholding access to the materials, Senate GOP leader Bill Brady “created two classes of voters: one class consisting of those citizens whose duly elected representatives could effectively and fully participate in the legislative process and another whose [s]enator is only allowed to participate to a severely limited degree.” It claimed that is an equal protection violation.

A spokesperson for Brady said his office had no comment on the suit, as he had not yet been served. But at a news conference last week, Brady said his caucus was not thrilled about McCann’s run.

“Were we happy about it? No. We think he’s trying to be a spoiler and we’re not sure it works but he’s free to do what he wants,” he said.

Ann M. Lousin, a professor at The John Marshall Law School and an expert on the state’s constitution, said the judicial branch is generally hesitant to get involved in matters that fall under the political question doctrine, or ones that would cause the courts to be “unduly involved in the mechanics of another branch of government.”

The case is essentially asking a judge to make a decision involving the rules of the Illinois Senate, she said.

“It does bring up an interesting point, though,” Lousin said. “We’ve never figured out the constitutional significance of having majority and minority leaders, which are positions that the Illinois Constitution enshrines for purposes of organization in the House and Senate.”

Pierson said Judge Andrea R. Wood, who presides over the U.S. District Court in the Northern District of Illinois, might hear preliminary arguments this week.

McCann announced his intention to run for governor as a “new political party candidate” almost two weeks ago, on April 19, after incumbent Republican Gov. Bruce Rauner squeaked by in the primary election. “A frustrated Republican electorate,” as the suit refers to the conservative voters, gave state Rep. Jeanne Ives 48 percent of their vote in the primary.

“When I announced I was not going to run for Senate, I said the Republican Party under Rauner was unrecognizable to me,” McCann said in a news release. “Rauner has smeared the reputations of proven conservatives and abandoned the principles that millions of Illinois working families hold dear: economic liberty, traditional values and law and order.”

The same day, Brady “expelled” McCann from the caucus and withheld access to party resources needed to best represent his constituents, according to court documents.

In a tweet, Brady said McCann resigned from the caucus. McCann responded that he had only resigned from his position as minority spokesman on committee, and that he is still a Republican until June, when he files 25,000 signatures to the State Board of Elections with his intention to run for office as a third party member.