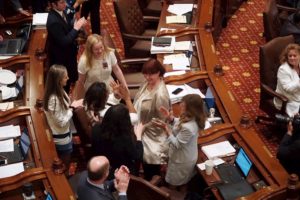 Sen. Heather Steans (right) receives high fives and congratulations on the Senate floor from her colleagues and legislative aides after the Senate voted to pass a bill legalizing adult-use recreational marijuana in Illinois on May 29. That bill, signed into the law by Gov. J.B. Pritzker in June, is now raising some questions from the Illinois Municipal League. The organization is seeking guidance from the Legislature on matters including policing and regulating use of the drug. (Photo by Lee Milner/Illinois Times)

SPRINGFIELD — The state organization representing local units of government is asking leaders in the General Assembly to make clarifying changes to the recreational marijuana law before it takes effect Jan. 1.

Brad Cole, executive director of the Illinois Municipal League, said the 1,298 cities, villages and towns in the state need guidance on four aspects of the Cannabis Regulation and Tax Act, signed into law by Democratic Gov. J.B. Pritzker in late June.

There is confusion, he said, about how law enforcers will know a person who is growing cannabis in their home is doing so legally as a prescribed medical marijuana user. Municipalities also are uncertain how they may regulate the drug.

Cole is asking legislators to write what is known as a trailer bill, a companion measure that clarifies a statute. The idea has bipartisan support.

Sen. Heather Steans, D-Chicago, one of the statute’s framers and her chamber’s sponsor, said, “We are likely to be doing a trailer bill.”

Republican Sen. Jason Barickman, from Bloomington, said he thinks his colleagues spent “a lot of time on the legislative language,” and any subsequent bill should be consistent with the goals of the original negotiations.

“I understand and support the idea of a trailer bill to make clarifications that the various stakeholders have brought forward. I think it’s very likely we’ll see one for multiple reasons, and we may see it as early as this fall,” he said. “I anticipate hearing from many stakeholders about clarifications they would like to see. By and large, that’s what the IML is seeking here.”

In a letter to lawmakers, Cole highlighted four points the league’s members would like the General Assembly to address. Each one, he said, was mentioned in his testimony before a panel of legislators in late May before the recreational marijuana bill became law.

“These are common sense issues” to determine what is legal and what is no, Cole said.

The new law allows those who have a medical marijuana card to grow no more than five plants in their home without needing to be a licensed cultivation center or craft grower. The League’s concern, Cole wrote in his letter, is the lack of “registration or notification requirements to municipalities or their police departments” about which residences can legally grow cannabis plants.

“We’re saying, we need to know,” he said. “How do we know if these are five legal plants or five illegal plants?”

Steans said the idea of “a registry had been raised,” but some interest groups expressed concerns it might be a civil rights violation. She added local governing bodies would know if the plants were legal by asking whether their owner had a medical marijuana card.

Barickman said the issue is one with “wildly different” viewpoints.

Also in question is a provision in the law dictating how governing bodies can regulate recreational marijuana.

“No unit of local government … may prohibit home cultivation or unreasonably prohibit use of cannabis authorized by this Act,” according to the law.

Cole, in his letter, wrote that “unreasonably” is not defined, so towns and municipalities might be exposed to “unknown litigation as they attempt to protect the health, safety and well-being of their citizens.” The League is asking the General Assembly to clarify the word’s meaning.

And it is seeking guidance on two regulations dictating how funds are distributed and may be spent by local governments. Money directed into one account, for example, now has rules for how it may be spent.

“This is restricted money being put into an unrestricted disbursement fund,” thus creating accounting confusion for local officials, Cole said.

Department of Revenue Director David Harris was copied on the Municipal League letter. In an emailed statement, a spokesperson said the department “is working to ensure successful implementation and rollout of the Cannabis Regulation and Taxation Act and works with all stakeholders to that end.”

“I think what’s happening right now is the multiple stakeholders are doing a deeper review of the law now that it’s been set, and they’re raising some questions that I think we can address through a trailer bill, providing some clarity,” Barickman said.

In an emailed statement, Jordan Abudayyeh, Pritzker’s press secretary, seemed to indicate the governor is open to a trailer bill. The administration, she said, “is focused on ensuring the successful implementation” of the law.

“Multiple state agencies are engaged in these efforts as we move forward creating one of the most equity centric industries in the country,” Abudayyeh said. “The Pritzker administration stands ready and willing to continue working to ensure Illinois has a cannabis industry that other states can look to as a model for equity and success.”