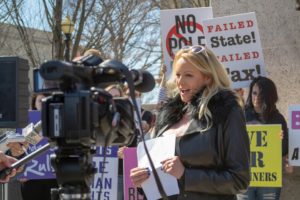 Adult film entertainer Stormy Daniels, whose real name is Stephanie Clifford, is pictured at an appearance at the Illinois State Capitol Friday. Daniels spoke for about two minutes, reading from prepared remarks against a six-year-old adult entertainment facilities tax, the proceeds of which support organizations that provide aid to victims of sexual assault. After the Capitol appearance, Daniels’ schedule included a book-signing at a Springfield adult entertainment facility. (Capitol News Illinois Photo by Jerry Nowicki)

Daniels read from prepared remarks in a brief appearance that lasted about two minutes, criticizing a fee paid by adult venues because, she said, it causes those clubs to raise their prices. That, in turn, drives away customers and “takes money out of the g-strings of the hard working strippers of Illinois.”

The Live Adult Entertainment Facility Surcharge Act became law six years ago and is commonly referred to as a “sin tax,” though Daniels called it a “pole tax.” It requires all facilities that serve or allow the consumption of alcohol and have live adult entertainment to either charge customers a $3 fee or pay a flat rate to the state.

The tax money goes into a fund that supports organizations that provide assistance to victims of sexual assault.

Daniels said rape crisis centers and other such groups “should be funded by the entire community.”

The state’s tax “incorrectly connects adult entertainment to rape, as though strip clubs cause rape,” she said. “Though the hypocrites, zealots and prudes of the world would like you to believe that there is a connection, it simply isn’t true.”

There is no evidence, Daniels added, connecting adult entertainers and their places of business to rape.

“There’s plenty of evidence connecting members of the clergy, and the Catholic Church in particular, with rape,” she said. “Where’s their special tax?”

Daniels, whose Friday schedule included a book-signing event and late-night performance at a local adult entertainment facility, disappointed the small crowd present at the protest with her quick appearance.

According to a spokesman for the Secretary of State’s office, organizers for the event had a permit for space in front of the statue of Abraham Lincoln on the east side of the Capitol from noon until 1:15 p.m., and another inside the statehouse’s rotunda from 1:30 p.m. to 3 p.m. Building staff had set up a podium and chairs.

In an email, though, a representative for Daniels said her team had no part in organizing the protest. She was asked to make a statement at 1 p.m. and her day was otherwise organized around “a tight schedule we’d planned around already,” the representative said.