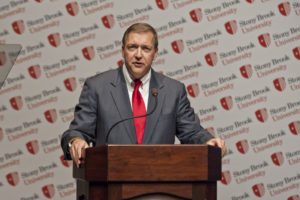 SBU President Samuel L. Stanley Jr., above, is a supporter of the limits on tuition increases offered through SUNY 2020. STATESMAN STOCK PHOTO

Gov. Andrew Cuomo’s SUNY 2020 legislation is set to expire at the next academic year’s end, and with it goes a built-in program for predictable tuition costs that Stony Brook University’s Undergraduate Student Government, faculty and administration are working to save.

“Before we had SUNY 2020, it was tuition roulette,” SBU President Samuel L. Stanley Jr. said in a meeting with campus media. “Some years there would be massive tuition increases—20 to 30 percent in a year—and other years, there would be nothing.”

A presentation prepared by SUNY Associate Vice Chancellor for Government Relations Stacey B. Hengsterman shows tuition was raised at some institutions by as much as $950 in a year, a fact that influenced Norman Goodman, a professor and Stony Brook University senator, to favor SUNY 2020 since its inception.

“The rational tuition policy is a reasonable approach to tuition,” he said in an interview. He continued, expressing his opinion that students deserve a free, quality education—preferably achieved for free—but that rational tuition is the next-best alternative.

A list of Stony Brook-specific SUNY 2020 talking points shows that due to the legislation, Stony Brook improved the student-to-faculty ratio to about 25:1, $3.2 million in grants were awarded to over 9,600 students and 19 new degree and advanced certificate programs were offered.

Both Stanley and Undergraduate Student Government Vice President of Academic Affairs Steven Adelson said extending SUNY 2020’s expiration would mean prospective students of New York’s public institutions would be able to compare and plan for future education costs, and the value of a Stony Brook degree would continue to rise while SBU would be able to continue to hire more faculty.

Adelson cautioned, though, that if the legislation was not renewed, preferably before it expired, the state funding Stony Brook currently receives could be put in jeopardy. 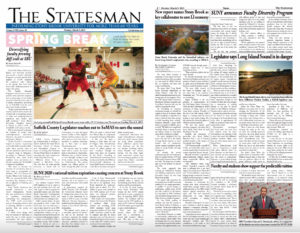 The Statesman published this piece in print on March 08, 2015.

“Four years ago, when rational tuition and SUNY 2020 was a conversation, it started with students,” Adelson said. “The idea is that once again, it should start with students.” In April, he will be presenting this resolution to the SUNY Student Assembly, a conference for student leaders from all 64 SUNY campuses.

“Obviously no one wants to have to pay more for anything—that’s just a general rule,” Adelson, who wrote the resolution, said. “But as a student, when you know there is no way your tuition will increase over the course of your four years by more than $1200, I think that’s fantastic.”

He did say that if SUNY 2020 is extended and Stony Brook looks to increase its tuition year after year, he thinks SBU’s administration should be more ardent about educating students as to what the increases will go toward, as there is a history of student discontent with fee increases of any type.

“We shouldn’t dictate what these tuition increases will be as students when we’re not knowledgeable about why the tuition increases are coming about,” Adelson said. “But it should be on the administrative end to [educate students], to be proactive rather than having student disapproval of fee increases.”