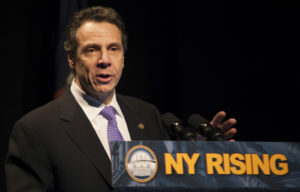 The State University of New York is taking steps to better combat sexual assault and violence across its 64 campuses. At Gov. Andrew M. Cuomo’s urging, the SUNY Board of Trustees passed a resolution on Friday, Oct. 2 to create a uniform set of prevention and response practices.

“I don’t need to suggest, and it would not be accurate for anyone to suggest, that this is a SUNY problem,” he said. “It is not. This is a societal problem. This is Harvard and Yale and Princeton, Albany and Buffalo and Oswego. It is not SUNY’s problem by origination. I would suggest it should be SUNY’s problem to solve and SUNY’s place to lead.”

The resolution requires all SUNY campuses to adopt an identical definition of consent; a policy to protect victims of a sexual abuse crime from being punished for a student code of conduct violation like underage alcohol consumption or drug use; and the Sexual Assault Victims’ Bill of Rights, which would provide victims with his or her rights, a list of resources and steps for reporting the incident, according to the memorandum. The document also specifies SUNY will work to organize a training course for each campus’ police force and administrators to address handling sexual assault incidents as well as “a public campaign to increase awareness among students and parents.”

The resolution comes during the United States Department of Education’s Office for Civil Rights’ (OCR) investigation into the way one of SUNY’s campuses, Stony Brook University, handles Title IX complaints. As part of the 1972 Education Act, Title IX is a federal clause prohibiting discrimination based on gender at any federally-funded educational institution. The investigation into SBU began on Wednesday, July 23, 2014.

This is not the first time OCR opened a case into SUNY’s Title IX compliance. An investigation in December 2010 into the 29 state-operated SUNY institutions—including Albany, Binghamton, Buffalo, Purchase and Stony Brook—was closed in September 2013 after OCR and SUNY reached an agreement that detailed 13 improvements the SUNY system was required to implement, according to a Department of Education (DOE) press release.

One of those improvements is a mandate that each SUNY institution designate a Title IX coordinator. At Stony Brook University, Marjolie Leonard holds that position.  According to Leonard, her role is not only to get involved with sexual assault cases, but also to oversee the university’s risk management program. 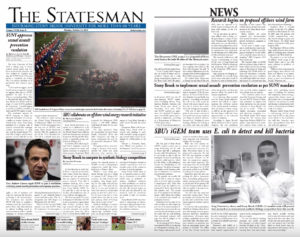 It is unknown what Leonard and the Stony Brook administration’s role will be in implementing the different aspects of the newly passed resolution, what the impact of these changes will be on the university or the how long it will take these improvements to be enforced across its campuses.

According to Stony Brook’s Media Relations Officer Lauren Sheprow, the new resolution lines up with similar programs that already exist on campus.

“The statewide policy introduced by Governor Cuomo and the new SUNY [Board of Trustees] resolution are aligned with many initiatives that are already underway at Stony Brook,” she said in an email.  “[This includes] awareness, prevention and education programs (i.e., Red Watch Band, CPO lesson during the 101 courses, Rape Aggression Defense [RAD] Programs, crime prevention awareness sessions about sexual assault, etc.); providing several types of training for students and employees; administering a campus-wide climate survey to all students that is systematically linked to our prevention work; and having a comprehensive definition of consent in our Student Code of Conduct.”

Sheprow added Stony Brook is anticipating further guidance from SUNY on the action items listed in the resolution but will also “monitor mandates and guidance from federal and state agencies.”