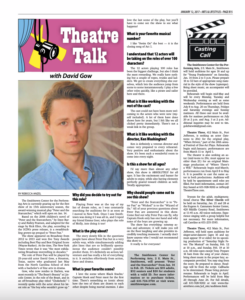 The Arts & Lifestyles pull-out section published this piece in print on Jan. 12, 2017.

The Smithtown Center for the Performing Arts is currently gearing up for the second show of its 15th anniversary season, the award-winning musical play “Peter and the Starcatcher,” which will open on Jan. 14. Based on the 2006 children’s novel of “Peter and the Starcatchers,” by Dave Barry and Ridley Pearson, and adapted for the stage by Rick Elice, the play, according to the SCPA’s press release, is a swashbuckling grown-up prequel to “Peter Pan.”

The show appeared on Broadway from 2012 to 2013 and won five Tony Awards including Best Play and Best Original Score (Wayne Barker). At the time, The New York Times wrote that it was “the most exhilarating Broadway storytelling in decades.”

The role of Peter Pan will be played by 25-year-old actor David Gow, a Houston, Texas, native who graduated last May from the North Carolina School of Arts with a bachelor’s of fine arts in drama. Gow, who now resides in Harlem, was most recently in “The Beast’s Beauty” at Lincoln Center, in the role of the Beast, and in an off-broadway play titled “Chokehold.” I recently spoke with the actor about his latest role as “the boy who wouldn’t grow up.”

Why did you decide to try out for this role?

Playing Peter was at the top of my list of dream roles, so I was constantly searching for auditions for it as soon as I moved to New York. Once I saw Smithtown was doing it I was all in, and I roped my friend Emma Geer, who plays the role of Molly, into doing it too.

What is the play about?

The story slowly fills in the questions people have about Peter Pan but in a very subtle way, while simultaneously adding plot lines that are so brilliantly spontaneous the audience couldn’t possibly predict them. It’s definitely an action/adventure and has really a bit of everything in it. It switches effortlessly from action, farce and drama.

What is your favorite scene?

I love the scene where Black Stache/Captain Hook and Peter meet for the first time. There’s something so iconic about how the two of them are drawn to each other despite being mortal enemies. I also love the last scene of the play, but you’ll have to come see the show to see what happens!

What is your favorite musical number?

I understand 12 actors will be taking on the roles of over 100 characters. How does that work? 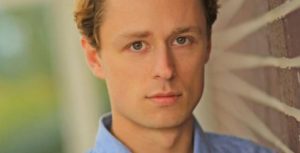 The 12 actors playing 100 roles has been the biggest challenge, but also I think the most rewarding. We really have nothing but a couple of ropes, trunks and ladders. We get to create everything else ourselves, which lets the audience jump from scene to scene instantaneously. I play a few other roles quickly, like a pirate and sailor here and there.

What is it like working with the rest of the cast?

The cast could not have been more welcoming to the actors who were new (myself included). A lot of them have done shows here for years, but I felt like we all clicked pretty immediately. There’s not a weak link in the group.

What is it like working with the director, Ken Washington?

Ken is definitely a veteran director and comes very prepared to every rehearsal. Very positive and enthusiastic about the show. It’s been such a wonderful room to come into every night.

What age group is this show geared-toward?

I’d say more than almost any other show, this show is ABSOLUTELY for all ages. It has the excitement and humor for adults to enjoy, while also having elements perfectly geared toward children as well. Totally appropriate.

Why should people come out to see this show?

“Peter and the Starcatcher” is to “Peter Pan” as “Wicked” is to the “Wizard of Oz.” All of your previous questions about Peter Pan are answered in this show. Come find out why Peter Pan can fly, why Captain Hook only has one hand and why none of the boys are growing up. The show has everything: nonstop action and adventure; it will make you roll on the floor laughing and also provides incredibly touching moments. I actually don’t know anyone who I would not recommend this show to. It really is for everyone!

The Smithtown Center for Performing Arts, 2 E. Main St., Smithtown, will present “Peter and the Starcatcher” from Jan. 14 to Feb. 25. Tickets are $35 adults, $32 seniors and $20 for students with a valid ID. For more information or to purchase tickets, call 631-724-3700 or visit www.smithtownpac.com.