Time for a change at Capitol Complex?

Capitol architect: ‘No excuse’ not to add changing tables to restrooms; lawmakers discuss looping Statehouse, other buildings into law 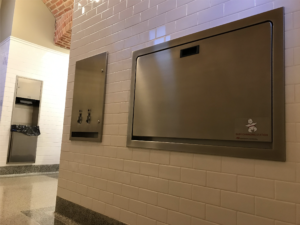 SPRINGFIELD — A law mandating baby changing tables be installed in both men’s and women’s restrooms beginning Jan. 1 does not apply to the Illinois State Capitol Complex, but the buildings’ architect plans to add them to some facilities anyway. She said “there is no excuse” not to.

Chicago Democrats Rep. Delia Ramirez and Sen. Ram Villivalam sponsored the initiative. With some exceptions — including spaces that ban those under 18 years of age and some health facilities — it applies to public restrooms in buildings constructed or significantly remodeled after the early 1990s.

That criteria does not pertain to the Illinois Statehouse, Michael J. Howlett Building and William G. Stratton Building, or the other five structures included in the Capitol Complex, according to spokespeople for Ramirez and Villivalam.

But because they are “highly public buildings,” Architect of the Capitol Andrea Aggertt said, “adequate facilities” for state employees and members of the public must be provided.

“Historical preservation is at the forefront of every decision that we make, but we have to be realistic in what the needs are,” she said. “My thought would be to make sure we have (changing tables) in any restroom that will have a high population of public, so groups coming to voice their opinion on a potential law can have those accommodations.”

Aggertt added each possible location will be “carefully considered.”

During an environmental lobbying day in early November, Sierra Club Deputy Director Kady McFadden tweeted that it took “at least 15 minutes” to find a changing table in the Statehouse for a volunteer. She checked the first-floor restroom, medical office and asked information desk staff before finding one in the lactation room behind a stairwell off the rotunda.

“It’s such a basic democracy thing,” McFadden said. “Here we had a woman — an activist in her community — who took the day off work, brought her child to the Capitol to lobby on an issue important to her family — advocating for clean air for her child to breathe — and democracy sort of failed her in that way.”

The law applies to new or mostly remodeled constructions, not existing buildings, due to parameters in the Equitable Restrooms Act. Ramirez said the Capitol Complex would have been included in the initial measure “ideally,” but there is an effort to loop the structures in through a companion bill.

“This legislation specifically ensures that all new state buildings are brought into the 21st century and universal access to baby changing stations,” Villivalam said in an email. “There are ongoing conversations with (Illinois Department of Central Management Services) to include existing state buildings after the fiscal impact is thoroughly assessed.”

Adding the changing tables to unisex and men’s restrooms will prevent constituent stories of changing a baby’s diapers in sinks, on floors or balanced on a lap, both lawmakers said.

Aggertt, a mother of two children, said she has been “left scrambling” in the past — once, she had to use the trunk of her car as a makeshift changing table, which is “no fun for yourself or the baby.”

“I believe if we’re making (changing tables) available for women, we also need to make them available for men,” Aggertt said. “We want to make sure we’re giving all families equal rights — that is most important. And I as a mom like to tell my husband he needs to take his turn also.”

There is no timeline for additions, but she said enhancements will be made “mindfully.”

Democratic Gov. J.B. Pritzker signed the law, approved by members of both parties in the General Assembly, on Aug. 9 along with 144 others.

“The governor believes that parenting is an equal responsibility and anyone who has a child should have equal access to the facilities that help them care for their child,” Pritzker’s spokesperson, Jordan Abudayyeh, said. “Too many fathers don’t have access to changing tables, and this is about giving all parents the tools they need to care for their children. This law reaffirms the governor’s values of making public spaces inclusive for all people.”

Ramirez said there are things that can be accomplished without extensive debate to make families a priority in Illinois.

“Civic engagement is not for people who are old enough to vote — it’s about encouraging democracy and having our children come tour the Capitol and visit lawmakers,” she said. “Something so basic as adequate access to spaces to change children is something so simple and affordable and can mean so much to families.”