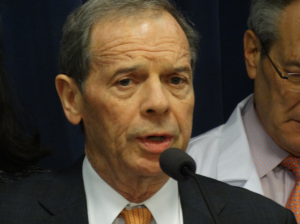 Senate President John Cullerton said during a press event Tuesday in Springfield that supporting an effort to raise the minimum age to purchase tobacco products in Illinois to 21 is “not a complicated issue.” The Democrat from Chicago blamed former Gov. Bruce Rauner for the initiative’s failure in the previous session. (Capitol News Illinois photo by Peter Hancock)

SPRINGFIELD — Legislation that would raise the minimum age to purchase cigarettes, e-cigarettes, vapes, chewing tobacco and other products in Illinois to 21 made it past its first legislative hurdle Tuesday.

The Senate bill sponsored by Julie Morrison, a Democrat from Deerfield, won the approval of the chamber’s Public Health Committee along party lines, by a vote of 8 to 4.

But the Republican members did not focus on the main issues the tobacco 21 initiative faced in previous legislative sessions. Instead, they took issue with the removal of language from current state law establishing penalties for minors in possession of tobacco.

This is the fourth time in as many years an effort to curb addiction to nicotine among teenagers was introduced in the General Assembly. Each time, opponents typically argued if 18 was old enough for an Illinoisan to vote, enlist in the military, get married or borrow money from a banking institution, it should be old enough to purchase and smoke a cigarette.

Republican senators, including Steve McClure from Springfield, said eliminating penalties is a “big problem,” especially when testimony in support of the measure suggested many minors who use tobacco products get them from their peers.

“I just don’t know what the rationale is for stripping away penalties, because if there is not going to be any consequences if [they’re] caught with this stuff, then what do [they] care,” he said. “I like the idea behind it — I think that as few people smoking as possible is a great thing — but to eliminate the penalties, to me, that’s a real problem.”

Current law states a minor who is caught with a tobacco product could have to take a “smoker’s education or youth diversion program” with parents. Each additional violation results in increased fees and hours of community service.

Morrison said her bill removes that language in an effort to “refocus the responsibility” onto the retailers who sell the tobacco product, as opposed to placing it on the minors who purchase the product.

And Kathy Drea, the American Lung Association’s senior director for advocacy, said the law as it is now is ineffective.

“If there were kids being ticketed in Illinois, we would know about it,” she said. “There is no education program available right now, and when there are things like that, they contact us. In all the years since that bill passed to penalize kids, no one’s ever contacted us and we’ve never heard of a child being penalized for possessing tobacco.”

Bill Fleischli does not agree. He is the executive vice president of the Illinois Petroleum Marketers Association and the state’s Association of Convenience Stores, and testified in opposition to Morrison’s legislation.

He said data shows smoking rates for people between the ages of 18 and 20 are down to a point where the effects of this bill would be negligible. Fleischli added the current law ensuring penalties for a minor possessing tobacco is working, much like regulations for alcohol.

“How can you have a deterrent if there’s no penalty for possession? It doesn’t work,” Fleischli said. “If possession of alcohol is against the law, why not make tobacco the same?”

Springfield Rep. Tim Butler, a Republican, is a chief co-sponsor of the same measure in the House. He also thinks any version of the tobacco 21 initiative needs to have “a little bit of teeth,” and this concern is a legitimate one.

“If the idea is we want to reduce teenagers, and people under 21, from smoking, then we need to be able to make sure we have the resources there, that if they are caught smoking, there are some consequences,” Butler said.

He added he is going to be meeting with the other sponsors and advocates to seek a compromise so those under the age of 21 who would be affected by this legislation “know there’s some consequences that go along with it,” Butler said.

At a press event Tuesday, Senate President John Cullerton, a Democrat from Chicago, said “this is not a complicated issue,” and blamed former Gov. Bruce Rauner, a Republican, for its failure in the previous session.

It was approved by both chambers, but the General Assembly was unable to overrule Rauner’s veto.

Cullerton also indicated Democratic Gov. J.B. Pritzker would sign the initiative into law if both chambers approved it first.

Jordan Abudayyeh, spokeswoman for the governor, said in a written statement Monday that Pritzker “looks forward to reviewing the legislation to raise the smoking age.”

Morrison, when introducing her bill during the committee hearing, said she would be introducing a “technical floor amendment” at a later date. The legislation is Senate Bill 21. Its twin measure is House Bill 345, which was assigned to a substantive committee Tuesday.