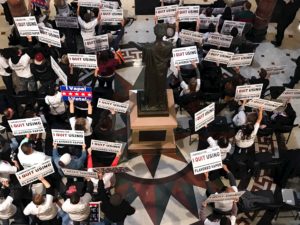 People supporting the use of electronic smoking devices rally Tuesday, Nov. 12, in the Capitol Rotunda in Springfield, chanting, “We Vape, We Vote.” They were lobbying lawmakers to reject two tobacco-related measures — one that would ban electronic cigarettes in public places and another that would ban flavored pods used in such devices. (Capitol News Illinois photo by Rebecca Anzel)

SPRINGFIELD — Bills aimed at curbing where Illinoisans can use electronic smoking devices and with what flavorings appear halted until the spring session of the General Assembly.

One bill would loop electronic cigarettes into the Smoke Free Illinois Act. The other would ban flavored cartridges and pods used in such devices.

Thursday is the last scheduled day of the fall veto session, which lawmakers are using this year to clean up new laws and pass new bills before they return to Springfield in January.

Indian Creek Democratic Sen. Terry Link is the sponsor of Senate Bill 1864, which would include vapes, e-cigars, e-hookahs and other such devices in the existing prohibition on smoking in public places, areas of employment, and within 15 feet of the entrance to a public building. There is an exception for tobacco stores and vape shops.

The Illinois Sheriff’s Association opposes the measure if jails are included in the ban. Executive Director Jim Kaitschuk said although not every county jail official allows vapes, “many do.”

He said jails allow vaping because many people who are jailed have substance abuse issues, or smoke cigarettes. Vaping is allowed to prevent forcing inmates to quit “cold-turkey.”

“I just want them to continue to have that as an option if they so choose,” Kaitschuk said. “I can tell you anecdotally that for those that utilize this, they have seen signs in a reduction of incidences.”

Link said in a committee hearing Tuesday any exceptions should be a “stand-alone bill if they want to do it.”

His measure cleared the Senate Oct. 29 and needs approval from a House committee before it can be considered by the full chamber.

Senate President John Cullerton, a Chicago Democrat, is sponsoring one of six flavor bans aimed at vape products. His has the highest-profile backing and was considered by a panel of lawmakers Wednesday.

Adam Hergenreder, an 18-year-old high school student from Lake County, told legislators he was sickened with a lung injury related to his vape use. He was sharing his story, he said, to encourage those in his age group not to use the product.

He said about 80 percent of those who attend his high school, Warren High School, use electronic smoking devices.

“I frankly just believe that it’s a different way to smoke — it’s not a smoking cessation device, or otherwise the (Food and Drug Administration) should approve it as such and do it as a prescription,” said Sen. Melinda Bush, a Democrat from Grayslake. 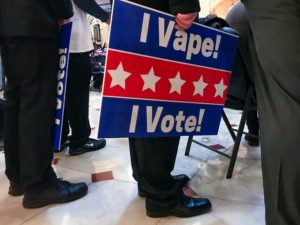 People supporting the use of electronic smoking devices rally Tuesday, Nov. 12, in the Capitol Rotunda in Springfield, chanting, “We Vape, We Vote.” They were lobbying lawmakers to reject two tobacco-related measures — one that would ban electronic cigarettes in public places and another that would ban flavored pods used in such devices. (Capitol News Illinois photo by Rebecca Anzel)

The Senate Executive Committee approved Cullerton’s measure by a vote of 13-4. But it would have to be approved by both the full Senate and House on Thursday to be moved to the desk of Gov. J.B. Pritzker.

While the attempt to ban flavored electronic smoking products in Illinois is being done legislatively, other states — including Michigan, New York, Massachusetts and Rhode Island — have enacted bans of some form through executive order.