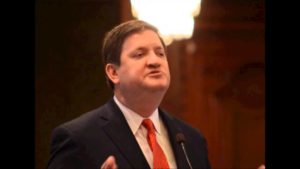 State Rep. David McSweeney was the House sponsor of a law that gives voters in McHenry County and a small portion of Lake County an option to more easily dissolve township governments. He calls a legal challenge to that law by two township road districts in McHenry County a “nuisance suit.” (Credit: davidmcsweeney.org)

SPRINGFIELD — A new state law allowing voters in McHenry County to more easily dissolve their townships already appears headed for tests in court and on the ballot.

Meanwhile, residents in one of those jurisdictions, McHenry Township, filed a petition with about 1,000 signatures to put the question of the township’s and road district’s dissolution on the March 2020 ballot. Their aim is to save the township by putting the question on a ballot for a primary election, when typically fewer people vote.

The new law is an initiative to lower property taxes in McHenry County by reducing levels of government there, in the sixth most populous county in Illinois. If a township is dissolved, its operations, property and employees would be transferred to the county government.

When he signed it in early August, Democratic Gov. J.B. Pritzker said in a news release: “I look forward to seeing how this bill works for the taxpayers.” Barrington Hills Rep. David McSweeney, the Republican sponsor, said if the law works well in McHenry County, the next step is to expand the provisions to the rest of the state.

But the road districts in Nunda and McHenry townships allege the statute is “arbitrary and unreasonable,” according to a court document.

Illinois’ Constitution prohibits the General Assembly from approving legislation applicable to only a few people — a “special or local” law — when it could be applied to a more general group.

James Militello III, the road districts’ attorney, said the township consolidation law should have applied to all of Illinois, not only McHenry County.

“Even from anybody’s standpoint, if you could go ahead and do this, make any county a test case, what’s the next one to be isolated?” he said. “Which county will become a testing ground for a particular piece of legislation to see if it works?”

McSweeney said the legal challenge is a “nuisance suit” and called Nunda and McHenry township road districts “tax-eating amateurs” who are seeking “to protect their jobs, their political patronage and their nepotism.”

“This just proves why it’s necessary to give taxpayers the option to choose to consolidate,” he said. “There was a full review of the law by the governor’s office before he signed it. I’m comfortable it’s constitutional.”

Citizens already had the ability to dissolve their township, but the new statute cuts in half the number of petition signatures required for members of the public to get an initiative on a ballot.

A township board could also propose a proposition.

A similar version of the measure — also sponsored by McSweeney and Democratic Sen. Terry Link, from Indian Creek — was vetoed by former Republican Gov. Bruce Rauner. In his message to lawmakers, Rauner wrote “this is a process that should be available with equal clarity across the state.”

The Nunda and McHenry townships’ road districts also assert the statute “is not rationally related to any legitimate state interest,” according to their lawsuit filing.

Reducing the number of local governmental bodies was “declared to be a strong goal of Illinois public policy,” the General Assembly wrote when it passed the law.

There are more than 8,500 local government units in Illinois, according to the state comptroller’s website — 1,428 of those are townships. These are the closest levels of government to residents, required to provide general assistance to the poor, administer property assessments and maintain roads.

Militello said the aim of reducing taxes will not be accomplished by targeting McHenry County.

Property taxes paid to townships account for about 1.5 percent of a McHenry County property owner’s tax bill, according to court documents. Taxes paid to road districts make up about 2.5 percent. Neither rate is the highest in Illinois for its respective unit of government.

“If high taxes are the issue, let’s look at the tax bill,” Militello said. “The townships and the road districts are really the smallest part of that pie.”

Jack Franks, McHenry County Board chairman and a former state representative, said townships and road districts contribute to residents’ tax burden, which is “one of the highest in the nation.” He was instrumental in writing Illinois’ current consolidation laws and participated in several related commissions.

“We know what needs to be done, but we’re up against these entrenched insiders who will do anything to take away the voters’ choices while using our tax dollars to do it,” Franks said.

Residents of McHenry Township Road District, one of the parties in the lawsuit, are the first in the county to begin the process outlined in the new law. In late September, a group of voters filed about 1,000 signatures at the township offices to get the question of whether McHenry Township and its road district should be consolidated with the county’s government.

Their motivation, and expectation, is to save the township, Craig Adams, township supervisor, said. The timing of their petition will ensure the proposal is printed on the primary ballot in March, as opposed to the presidential ballot in November when more voters tend to turn out.

Their effort thwarted that of a local official who wanted residents to consider the question in the fall, Adams said.

“It’s up to the people; it’s their right,” McSweeney said. “That’s how I designed this legislation. But the officials are obviously very scared about the possibility and the voters.”

Adams has been supervisor for more than four years. Before that, he was on the township’s board for about 20 years. He said he does not understand how dissolving road districts and townships “can be cheaper.”

For one thing, Adams said, “70 cents on the dollar” of a McHenry Township property owner’s bill goes to the school district. He added the township’s employees are not unionized, but the county’s are — it would cost taxpayers more money to provide the same level of services.

“As a township government, if they could prove to us that we’re going to save significant tax dollars — not $10 year, but $100 or $200 — and they’re not going to impact services, we’re on board,” Adams said. “But no one can show us that, because there are no significant savings.”

The township is exploring options to secure an independent analysis studying the economic effect of dissolution. There has not been a comprehensive study completed for about 25 years.

McSweeney pointed out the law has a provision that if a township’s residents vote to consolidate with McHenry County, their property taxes would drop by at least 10 percent for the first year. Additionally, all money linked to that township must be used to benefit the geographic area of that eliminated level of government.

Franks said it “doesn’t make any sense” that the lawsuit is filed against McHenry County. Nunda and McHenry Townships’ road districts should have sued the state, he said.

“We (at the county level) didn’t write it, we didn’t pass it and we are subject to it just like they are. This is an example of why people don’t trust their government,” he said. “The lawsuit is poorly thought out. It makes one’s blood boil.”

Militello said because the county will assume the responsibilities of the local governments residents vote to eliminate, it makes sense to challenge the constitutionality of the law by suing the county.

Republican Rep. Steven Reick, from Woodstock, is the only state lawmaker whose district falls completely within the boundary of McHenry County. He voted against the measure in the House, and declined to comment on the lawsuit.

The state’s attorney defending McHenry County has until mid-November to file a response to the lawsuit. A spokesperson said the attorney general’s office declined to take up the defense at this stage.