Published by the Times of Huntington-Northport and Times of Smithtown on Nov. 03, 2016 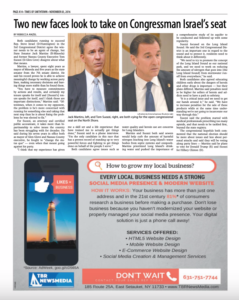 The Times of Huntington-Northport and Times of Smithtown, pictured, published this piece in print on Nov. 03, 2016.

Both candidates running to succeed Rep. Steve Israel (D-Huntington) in the 3rd Congressional District agree the winner needs to be an agent of change, but State Senator Jack Martins (R-Mineola) and former Nassau County Executive Tom Suozzi (D-Glen Cove) disagree about what that means.

Martins, a lawyer, spent eight years as mayor of Mineola and five years as the state senator from the 7th senate district. He said his record proves he is able to achieve meaningful change by working across party lines, making necessary decisions and leaving things more stable than he found them.

“You have to measure commitments by actions and results, and certainly my tenure speaks for itself and [Suozzi’s] tenure speaks for itself, and I think those are important distinctions,” Martins said. “Oftentimes, when it comes to my opponent, the problem is he’s more concerned with running for something else and taking that next step than he is about fixing the problems he was elected to fix.”

For Suozzi, an attorney and certified public accountant, it takes more than bipartisanship to solve issues the country has been struggling with for decades. He said during his seven years in office both as mayor of Glen Glove and Nassau County executive, he fought to “change the status quo” — even when that meant going against his party.

“I think that my experience has given me a skill set and a life experience that have trained me to actually get things done,” Suozzi said in a phone interview. “I’m the only candidate in this race that has a proven record of standing up to very powerful forces and fighting to get things done on behalf of the people I serve.”

Both candidates agree issues such as water quality and heroin use are concerns for Long Islanders.

Martins and Suozzi both said sewers would help curb the amount of harmful nitrogen leaching into Long Island’s water bodies from septic systems and cesspools. Martins prioritized Long Island’s drinking water and pushed the importance of a comprehensive study of its aquifer to be conducted and followed up with some regularity.

Suozzi focused on the Long Island Sound. He said the 3rd Congressional District is an important one in regard to the sound and to protect it, residents need to think about it differently.

Both candidates also agreed educating children early about the dangers of heroin and other drugs is important — but their plans differed. Martins said penalties need to be higher for sellers of heroin and addicts need to have a path to sobriety.

“It is a critical issue and we need to get our hands around it,” he said. “We have to increase penalties for the sale of these products while at the same time understanding we’re not going to incarcerate our way through this.”

Suozzi said the problem started with medical professionals prescribing too many opioids, and that needs to be tackled first, beyond the state registry.

The congressional hopefuls both commented that the national election should be more about issues and less about personal attacks and said they will be voting along party lines — Martins said he plans to vote for Donald Trump (R) and Suozzi for Hillary Clinton (D).