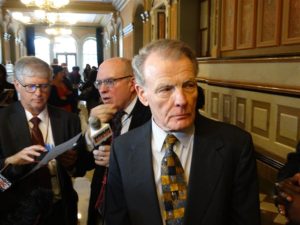 House Speaker Michael Madigan speaks to members of the press Oct. 28, 2019, at the Capitol in the Statehouse after a House Democrats caucus. Madigan is handling the effects at the Capitol of coronavirus in Illinoison a “day-by-day, step-by-step basis,” his spokesperson, Steve Brown, said Thursday. (Capitol News Illinois file photo by Peter Hancock)

SPRINGFIELD — Announcements of government policy changes and public and private closures have been seemingly non-stop this week as public health officials adapt to an ever-changing landscape amid the spread of novel coronavirus.

The governor and public health officials hosted daily informational briefings, canceled General Assembly session days and limited visitors to the Capitol in Springfield and James R. Thompson Center in Chicago as social distancing measures have gone into full swing in an effort to stop the spread of the virus. Universities, athletic associations and professional sports leagues have canceled events as well.

The flurry of news and announcements showed how quickly circumstances change as the number of cases in the state and country grows.

On Monday, when Democratic Gov. J.B. Pritzker issued a state of emergency decree, there were 11 known positive cases of COVID-19. That number jumped to 32 on Thursday.

“The work involved in issuing clear and direct guidelines on a day-to-day basis, when new information comes in literally by the minute, is time consuming and requires consultation with many stakeholders and partners,” Pritzker said Thursday evening. “We are committed to getting it right every step of the way.”

He added his office will remain open “as we are fully committed to ensuring that the government will continue to serve the people of Illinois during this time.”

In a statement, Senate President Don Harmon, a Democrat from Oak Park, said his chamber canceled next week’s legislative session to “do its part” given public health groups’ recommendation to avoid large gatherings.

“We will constantly monitor the situation and make future decisions based on best practices and advice from the state’s public health and emergency preparedness professionals,” he said.

Legislative leaders participated in briefings and conference calls with representatives from the governor’s office and Department of Public Health, among others.

“I can’t think of any comparable situation, and managing the Legislature is a different breed of activity than managing a business, a newspaper, what have you,” he said. “We have citizens that come from all over the state to talk about issues they’re concerned about, and you’ve got to balance all of that alongside the public health, public safety, concerns.”

Madigan, Brown added, is handling the status of coronavirus in Illinois on a “day-by-day, step-by-step basis.”

For Jacob Friefeld, a research historian at the Abraham Lincoln Presidential Library and Museum, the situation borders on unprecedented.

He said he did not find any instances of the General Assembly interrupting session due to public health concerns.The Spanish flu in 1918 is “the most likely time for this to occur,” he said, but both chambers had concluded their business in June 1917, before the worst of the outbreak in Illinois.

One of the deadliest pandemics in human history, the influenza infected about one quarter of the world’s population at the time. It is estimated to have killed between 17 million and 50 million people.

Former Gov. Pat Quinn, Friefeld said, issued a disaster proclamation in 2009 in response to H1N1, referred to as the Swine Flu, but that did not affect the Legislature.

The General Assembly sets its own schedule, according to the Illinois Constitution, so there is nothing preventing the chambers from modifying its calendar to allow for public health considerations.

Ann Lousin, a professor at the John Marshall Law School in Chicago, said the House and Senate can also decide where its members meet.

“They can move around enormously,” she said.

Activity was also curtailed at the Capitol building where the Legislature would otherwise be meeting. Secretary of State Jesse White, whose office manages the Capitol Complex, announced Wednesday that tour groups and rallies would not be permitted at the Capitol, and previously scheduled permitted events have been canceled.

Spokesperson Henry Haupt said that “doesn’t mean they can’t be rescheduled at a later date.”

He added White meets regularly with members of the governor’s office, officials from the Public Health Department and the four legislative leaders.

When asked whether White would consider closing access to the Capitol Complex, which would presumably impact the governor, General Assembly and other constitutional officers, Haupt said White “would work in concert with our partners as a team.”

“Everything is fluid,” Haupt said. “It seems like things are changing every minute.”

Both Comptroller Susana Mendoza and Treasurer Michael Frerichs are following guidance from the Department of Public Health and governor’s office as well.

No details on those guidelines were immediately available.

“Comptroller Mendoza’s priorities are to ensure her staff understands the precautions they can take to stay as healthy as possible and prevent the spread of the virus, and to make sure there are no disruptions to the core functions of this office,” her spokesperson said.

“The state treasurer’s office invests in people,” Frerichs’ spokesperson said. “We are doing everything possible to ensure the safety of our co-workers while continuing the office’s core functions so our partners and customers can do the same.”

A spokesperson from the Illinois Department of Public Health said officials were occupied with “the ongoing response to COVID19,” but all updated information would be available during the daily briefings.

During Thursday’s briefing, Department Director Ngozi Ezike said the state’s focus is on investigating the cases and caring for those patients.

“Guidance for this novel virus is changing day-by-day — really, hour-by-hour — and we want to empower people to think about what they can do and how they can reduce their risk of infection,” she said.