The speed limit on Nicolls Road between Stony Brook University’s south entrance and Route 25A is 45 miles per hour, a change university officials pushed for in an effort to make the road more pedestrian friendly for those crossing from West Campus to East Campus. (REBECCA ANZEL / THE STATESMAN)

It was about 29 degrees on the night of Thursday, Feb. 7, 2013 when Stony Brook University student Brianna Bifone was walking on the sidewalk along Circle Road near Tabler Quad. At 10:12 p.m., University Police officer Salvatore Casaccio jumped a lane of traffic and hit her with his police cruiser, pinning her underneath the vehicle for about 30 minutes, according to an article by The Statesman. She spent one month in the hospital.

This incident brought the issue of pedestrian safety to the forefront of discussion between students, faculty, staff, administrators, campus visitors and media outlets. Additional such occurrences maintained the community’s concern.

An accident on Saturday, Sept. 21, 2013 involved a student-operated SUV pinning a male student bicyclist to the ground at the intersection of Roosevelt Drive and Circle Road. A few months later on Saturday, Dec. 7, a 20-year-old woman was struck in a hit-and-run on North Country Road and Hawkins Road behind the Stony Brook train station. And in an accident two months ago on Wednesday, Sept. 17, a male student driving a Nissan Altima, Lu Cao, struck another student who was skateboarding across the intersection of Marburger Drive and Circle Road in the traffic circle.

To combat the chance of these types of accidents, Stony Brook University employs a strategy of enforcement and education, coupled with efforts in conjunction with Suffolk County officials to improve the pedestrian safety features on county roads. The University Police Department seeks to ensure drivers are obeying traffic laws while the Division of Campus Residences’ Department of Residential Risk Management simultaneously has many ongoing programs designed to teach all students about safety measures and practices.

Despite the introduction of various initiatives geared toward pedestrian safety seemingly coinciding with vehicle and pedestrian accidents, Stony Brook’s Media Relations Officer Lauren Sheprow said the timing of those programs is in no way a result of a particular circumstance.

“The various items that [the university] has been working on are not in response to [any] accident; they are proactive, ongoing initiatives,” Sheprow said in an email.

Safety items—like reflective bike accessories and glow-in-the-dark clothing—are sold in the Seawolves MarketPlace in the Student Activities Center on campus. Scarzella helped sponsor this initiative and said those in charge at the MarketPlace were very receptive to carrying the line of goods.

“If we’re telling students to wear helmets and reflective gear, you would think we’d want the Seawolves MarketPlace to have it,” he said.

Scarzella did not know definitively how well these items sold, but he did say that it was his understanding that the merchandise did well.

Aron Persaud, MarketPlace manager, was not available for comment.

Residential Risk Management also has giveaways throughout the academic year to distribute products like flat, magnetic LED flashlights and reflective safety vests. The vests, introduced in fall 2011 and available for students to receive at various locations on the west and east campuses, were introduced with those students who walk to an off-campus home in mind.

“I always tell people that the vests are symbolic of what we want people to do,” Scarzella said. “If you think about it, putting on a vest is about personal responsibility, so that’s the message there.”

Aside from social media efforts, resident assistants pass along information garnered during training to incoming students during orientation and residential students during mandatory building meetings. It is this peer-to-peer interaction that Scarzella said is the key to assuming “personal responsibility.” And this training extends to all RAs and residence hall directors working with Stony Brook students living in the overflow housing at Dowling College’s Brookhaven Residential Village campus in Shirley, New York as well.

To further impress the importance of pedestrian safety education upon the campus community, UPD purchased an electronic sign placed at various locations around campus—like on Marburger Drive heading toward Circle Road and on Circle Road in front of Roth Quad—and use it to display messages to drivers. “Don’t text and drive” is a common one.

That message in particular is important, according to Assistant Chief of Police Eric Olsen, as a large factor in traffic accidents is the common use of handheld devices and earbuds by both pedestrians and drivers.

“Our hand-held devices are a fairly new thing to the game within a few years, but to me, it has the biggest impact on pedestrian safety,” he said. “We’re distracted more while we’re walking than we ever have been.”

One way SBU hopes to get pedestrians to pay attention to their surrounds is by installing recently-purchased signs to go on the ground in crosswalks. Currently used in New York City, the signs, which will simply say “look,” are to be placed right in the line of sight of a pedestrian using a handheld device.

Even so, in a traffic accident between an automobile and a pedestrian, the responsibility is always placed on the driver. UPD is working to crack down on infractions drivers commit, like speeding and failure to stop at a stop sign.

In fact, enforcement is up 45 percent this year. This has not translated into a decrease in accidents between two cars or a vehicle and a pedestrian, however, a matter UPD finds “frustrating,” Olsen said, because the department “devotes so much time” to the effort.

One area Stony Brook officials are working to make safer for the campus community is Nicolls Road, which runs north and south and separates west campus from east campus. While the University built a tunnel running underneath the roadway to allow students, faculty, staff and visitors to easily and safely travel from Life Sciences on west campus to the Health Sciences Center and the Stony Brook University Hospital on east campus, Scarzella and Olsen agree more has to be done before the county road is a safe option for those not utilizing public transportation or a personal vehicle.

“This is my opinion, I’m not going to speak for the entire University, but I am comfortable saying that I do not encourage students, faculty or staff to walk, run or bike in the local community off-campus,” Scarzella said. “I don’t think that the roads are safe enough for that and I encourage people to use public transportation. Those are not roads that are designed for pedestrians.”

Olsen agreed, adding that he thinks the tunnel is “a great option” for those wanting to get from one side of campus to the other. “You never step on the road. That’s what that’s meant for.”

“This has been a high priority for me since I came,” University President Samuel L. Stanley said. “It’s been very difficult to make as much progress as I would like. We do not control all of the pedestrian areas that are important to Stony Brook, so I can’t essentially force what I want on the Town of Brookhaven or Suffolk County.”

One notable project was the completion of sidewalks and guardrails from the university’s north entrance to Route 25A in October 2013. Suffolk County Legislator Kara Hahn of District 5 played a large part in accomplishing this. She was unavailable for comment, but in a press release said the “project will protect pedestrians utilizing Nicolls Road and link the Stony Brook University campus to the greater community. By providing sidewalks here, pedestrians will no longer have to walk in a vehicle travel lane, which threatens their safety and impedes the flow of traffic.”

Stanley said he hopes to also get sidewalks constructed on Stony Brook Road so those trying to get to the Research & Development Park or to a residence off-campus can do so safely. He also plans to speak to Brookhaven and Suffolk County officials about the possibility of installing elevated crosswalks in problem areas, find ways to “push cars to the periphery of campus” and create more bike and walking paths, among other projects, to continue this ongoing effort.

About 37 miles away in Hempstead, which is in Nassau County, is Hofstra University. With about 11,000 students, approximately 3,800 of them living in dorms on campus, pedestrian safety is a concern for Hofstra’s officials as well. For students to get from one side of campus to the other, they have to cross Hempstead Turnpike, a six-lane roadway that the Tri-State Transportation Campaign classifies in a report as the most dangerous road in Nassau County because of its high number of pedestrian fatalities—there were 12 in the three-year time span from 2010 to 2012.

Melissa Connolly, vice president of Hofstra University Relations, could not be reached for comment, but an article published in The Hofstra Chronicle, Connolly said, “when students were taking a risk and crossing Hempstead Turnpike, we had to do everything possible to make the crossing safer.” 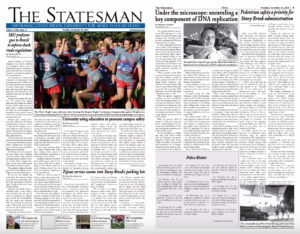 The City of Syracuse is currently working to increase safety for pedestrians and bicyclists as well. According to a press release, the speed limits on two busy roadways close to and important for the Syracuse University community—Comstock and Waverly Avenues—will be reduced and a new bicycling lane will be added.

“By doing that, that’s called ‘traffic calming,’ so the traffic has to slow down because there’s not as many lanes,” Syracuse Department of Public Works Commissioner Pete O’Connor said in a statement to WAER Syracuse Public Media. “We are going to have [a] protected bike lane, and we are going to have parking on those streets also.”

Stanley said Suffolk County and Town of Brookhaven officials listen when he raises safety concerns in meetings, “but then it’s always about resources and money, so they always say that they have competing things.”

Scarzella and Olsen both hope that students, faculty and staff take the knowledge gained from university education and enforcement efforts and apply it to safety off-campus.

“We’ve done a lot to get the message out there, and really at some point, there’s only so much messaging you can put out there,” Scarzella said. “You have to do your due diligence.”

Stanley agreed. “Each [accident] that has occurred, as far as I’m concerned, is too many,” he said. “I think these are all preventable, preventable by people paying attention.”