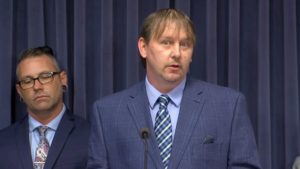 Tim Teml, co-owner of That 1 Vape in Joliet, speaks in opposition to a bill that would ban the sale or distribution of nicotine products with a “distinguishable taste or aroma.” Teml, who said 98 percent of his sales are of flavored e-liquids, said he doesn’t think lawmakers are “educated” on the issue. (Credit: blueroomstream.com)

Democratic Villa Park Rep. Deb Conroy’s Flavored Tobacco Ban Act would outlaw the sale or distribution of nicotine products with a “distinguishable taste or aroma.” It applies to cigarettes, cigars, hookahs, chewing tobacco, vape pods and other products. The bill is set for consideration when lawmakers return to the statehouse Monday for the fall veto session.

Members of the Smoke Free Alternatives Coalition and vape business owners said during a news event at the Capitol that prohibition would “drive well over 100,000 Illinois adults back to smoking traditional cigarettes” and devastate their businesses.

“We are not big tobacco. We started this business to keep adult smokers off combustible cigarettes, and flavored e-liquid makes up 98 percent of our business because adult smokers prefer flavors,” said Tim Teml, co-owner of That 1 Vape in Joliet. “Our biggest fear is that the temptation of easily-available cigarettes will drive them back to smoking without flavored e-liquid options, not the loss of revenue.”

When Democratic Gov. J.B. Pritzker signed a gambling expansion bill into law, it included language that enacted a 15 percent wholesale tax on e-cigarettes. It took effect July 1, and is the first time the state taxed the product. The revenue collected will be used to help fund a new capital infrastructure plan.

Also included in that law is a $1 hike in the cigarette tax, to $2.98 per pack. Josh Sharp, executive vice president of the Illinois Petroleum Marketers Association and Association of Convenience Stores, said the money Illinois collects from that tax increase is earmarked for the same improvement projects.

The Department of Public Health allocates other revenues collected from the tobacco usage tax toward a cessation program and Medicaid.

He added this legislation is a product of lawmakers attempting to address the growing number of severe respiratory illnesses related to vaping.

“I don’t really think it fixes the problem it’s intended to solve,” Sharp said. “If you want to fix vaping, fix the vaping issue.”

According to the Department of Public Health, 153 people in Illinois have been sickened with lung injuries resulting from the inhalation of chemicals from vaping. Forty-one others are being examined to see if their illnesses are related. Two Illinois residents have died.

Each of them reported using either an e-cigarette or other product such as THC. There are more than 50 products and devices linked to the state’s cases, according to the federal Centers for Disease Control.

Teml said he does not think lawmakers are “educated” on this issue.

“I think it’s our job, and that’s exactly why we’re here today. … It’s not that they’re overreaching — it’s that a lot of them just don’t know what’s going on,” Teml said. “They don’t know our industry.”

The Smoke Free Alternatives Coalition made its plea to lawmakers the same day U.S. Sen. Dick Durbin, a Democrat, called for an update from the Food and Drug Administration on its pending flavored e-cigarette product ban.

The administration issued a news release Sept. 11 about its plans to publish a compliance policy to “tackle the epidemic of youth e-cigarette use.” It has not distributed an update since.

“Six weeks ago, FDA finally announced a ban on e-cigarette flavors, including mint and menthol — a move that I have called on the FDA to make for years,” Durbin said in a news release. “It is past time for the FDA to put into effect what they announced weeks ago, and what they should have done years ago.”

Conroy’s House Bill 3883 is scheduled for a committee hearing Monday. Fifteen bipartisan lawmakers have signed on in support of the measure.