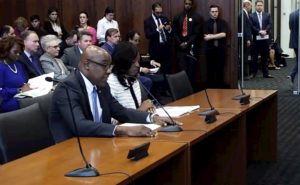 Attorney General Kwame Raoul answers lawmakers’ questions during a meeting Monday in Chicago of a panel of House lawmakers to discuss recent cases of illnesses in Illinois involving e-cigarettes and vaping devices. “Illinois is not alone is this crisis, but it has touched Illinois,” said Raoul, who also said he favors a ban on flavored e-cigarettes. Sitting next to Raoul is Illinois Department of Public Health Director Ngozi Ezike. (Credit: BlueRoom Stream)

SPRINGFIELD — Illinois officials agree the growing number of severe respiratory illnesses related to vaping must be addressed, and in recent days, the state’s chief executive, top attorney and health expert have taken action. On Monday, lawmakers explored legislative options during a committee hearing in Chicago.

Illinois Department of Public Health Director Ngozi Ezike said there are 69 people in Illinois sick with lung injuries resulting from the inhalation of chemicals from vaping. Thirteen others are being examined to see if their illnesses are related. One Illinois resident has died.

Each of them reported using either an e-cigarette or other product such as THC — that is “the only common thread” in Illinois’ cases, Ezike said. According to the Centers for Disease Control, there are more than 50 products and devices linked to the state’s cases.

Democratic Gov. J.B. Pritzker issued a warning to residents Friday not to use e-cigarettes and other vaping products until the CDC completes an investigation being done in conjunction with the state Public Health Department.

“There is much more research needed to understand the short- and long-term health effects of using e-cigarette products,” he said in a news release.

The Department of Public Health has also assembled a panel of stakeholders and experts to evaluate vaping’s health impacts and appropriate regulatory controls.

Its first meeting was Sept. 13, when representatives from various state agencies — including the health department, attorney general’s office, Department of Human Services, State Board of Education, Emergency Management Agency, Department of Financial & Professional Regulation, Department of Agriculture and Poison Center — met in Chicago to understand what each was doing to combat “the current situation,” an IDPH spokeswoman said in an email.

“The working group is not only looking at the immediate situation, but also the larger issue of youth vaping,” she added.

The IDPH is also heading other initiatives. Officials have traveled to middle and high schools across the state to see how prevalent the use of vaping devices is, and they plan to launch a social media campaign explaining the negative health impacts of smoking products, including e-cigarettes, Ezike said.

Last week, IDPH launched an online survey that allows Illinoisans to anonymously submit information about their vaping habits. Ezike said department officials are hoping it will give them insight into why some users of e-cigarettes and other devices have gotten sick, while others have not.

Attorney General Kwame Raoul told lawmakers Monday that he has been discussing with counterparts in other states the regulation and investigation of manufacturers of e-cigarettes and vaping devices.

“Illinois is not alone is this crisis, but it has touched Illinois,” he said.

With the top attorneys in seven other states, Raoul petitioned the federal Food and Drug Administration to “strengthen” e-cigarette guidance, specifically related to flavored products.

Legislation to ban selling flavored e-cigarettes was discussed during Monday’s panel of House lawmakers in Chicago.

“We have to realize a lot of the harm is growing out of the black market, and reflexive policies that are not fully thought out might have the reverse impact of growing the black market.”

Advertising e-cigarettes as a way to help quit an addiction to cigarettes, Raoul and Ezike said, is having an opposite effect on young people.

Some Republican lawmakers questioned whether a statute banning flavored e-cigarette products was the best approach to address this issue, and whether the General Assembly should wait for the CDC to conclude its investigation into Illinois’ illnesses before drafting a legislative response.

Rep. Jeff Keicher, a Republican from Sycamore, highlighted what is still unclear — whether any of the cases resulted from product tampering, brand, ingredients or usage. He added e-cigarettes have been available to consumers for more than 10 years, but people have become seriously ill within only the past few months.

“Are we being too premature on addressing this issue with what’s been proposed when we don’t even know from the CDC … what those issues are that are reflective of the problems that are putting these folks in the hospital?” Keicher asked.

Ezike said “there is no doubt” that the “one commonality” is all 69 Illinois cases involved an e-cigarette or other vaping device.

In responding to a question from Republican Rep. Deanne Mazzochi, from Elmhurst, Ezike said 75 to 80 percent of those cases included people who vaped THC, the psychoactive substance in marijuana.

“I want to provide a solution that will keep our kids safe,” Rep. Grant Wehrli, a Republican from Naperville, said. “Yes, we need to look at the underage use of any vape product, whether it’s flavored or not. …. But if we’re concerned about life and people’s health and safety, then we need to make sure we have a solution that is solving the problem.”

E-cigarettes are not synonymous with devices used to smoke THC, she said, and the health officials investigating the severe illnesses across the U.S. are finding “black market products,” not ones a consumer would find for sale at a vape shop.

But a group of health advocates — the American Cancer Society Cancer Action Network, American Heart Association, American Lung Association and Respiratory Health Association — said in a statement that barring the sale of flavored tobacco products will “ensure our kids are protected from tobacco’s deadly toll.”

“Tobacco companies have long used flavors to aggressively lure kids into being lifelong customers. Restricting the sale of all flavored tobacco products, including menthol cigarettes, flavored cigars, hookah and smokeless tobacco will also help protect our kids,” the organizations said in a joint statement.