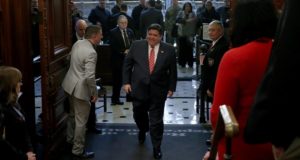 Gov. JB Pritzker enters the House chambers Wednesday at the Illinois State Capitol prior to delivering his annual budget address. He tied the proposal to the passage of a graduated income tax amendment and presented two budget scenarios if the amendment does or does not pass. (Antonio Perez/Chicago Tribune)

The proposal to establish a graduated income tax structure — which would levy higher income tax rates on higher thresholds of income — is a hallmark of Pritzker’s policy agenda.

His $42 billion budget proposal includes $1.4 billion the state would expect to receive if the amendment passes on the November general election ballot. But that spending authority would initially be set aside pending the results of that election.

“Because this reserve is so large, it inevitably cuts into some of the things that we all hold most dear,” Pritzker said, “…but as important as these investments are, we cannot responsibly spend for these priorities until we know with certainty what the state’s revenue picture will be.”

The choices are driving “a little bit more fiscal security and greater investment in job creation, building the economy, or the status quo, which frankly hasn’t been working for us,” she said.

“If we can provide additional revenues for the state to meet its means and only ask the wealthiest 3 percent to be the ones to fund that, essentially freezing your taxes or reducing them, that makes sense to me,” Mendoza added.

“When we pay down our bills, we pay less in interest. When we pay down our pension unfunded liability, we improve our credit rating, which means when we go out for bonding, we pay a lower interest rate,” Frerichs said. “If we do things right up front, it will save us money years down in the road.”

But the budget’s “predication” on the success of the “fair tax” keeps several categories “held hostage,” according to Bloomington Republican Rep. Dan Brady.

Voters will decide in November whether they support the graduated income tax change, and members of the General Assembly are due to finalize the state’s budget by May 31.

“I think we better look at, and not count on, any of those revenues,” Brady, who is a deputy minority leader in the House, said. “We should do more belt-tightening in the operations of agencies, and focus on not having any new taxes.”

The proposed cut in education spending should the graduated tax fail is an area many interest groups and legislators from both sides of the aisle take issue with. In Pritzker’s plan, $150 million of the $350 million annual boost to K-12 schools — funding called for by the evidence-based funding formula, which initially passed in 2017 — will be reserved.

Sen. Andy Manar, a Democrat from Bunker Hill and the main architect of that law, said in a statement that “in any tax structure, the right to a high-quality public education doesn’t change, nor does our responsibility under the law to see it through.”

Pritzker, in his speech to lawmakers Wednesday, said, Illinois’ “future is bright” and is “growing stronger every day.”

When asked whether he agreed with the sentiment, Frerichs said “there is still a lot of work that needs to be done,” but he praised the governor’s optimism. Mendoza said she does not have “time to waste on cynics” and will continue to “do what [she] can to save the state.”

Republicans, for the most part, agreed that circumstances have improved, and they stressed the need to continue on strong fiscal footing.

“I don’t think the future is so bright we have to wear shades,” Brady added, “and we can’t hold hostage higher education or other entities in the budget. We have to move forward.”