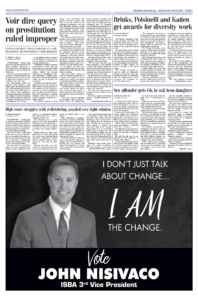 The Chicago Daily Law Bulletin published this piece in print on Wednesday, March 28, 2018.

Published by the Chicago Daily Law Bulletin on March 28, 2018

SPRINGFIELD — Illinois’ high court ruled potential jurors can be asked questions pertaining to their biases about participation in gang activities but not about sexual history.

The case centers on whether the defendant, Theophil Encalado, was wrongly convicted on three counts of aggravated criminal sexual assault due to an unfair trial.

His representation before the Supreme Court, Jennifer L. Bontrager, argued the trial judge should have allowed potential jury members to be asked if they could fairly consider evidence about prostitution. Prosecutors argued the question was designed to place in potential jurors’ minds the idea the victim was a prostitute, inserting the defense’s main argument into voir dire.

“Defendant’s proffered question did not involve a matter that was indisputably true and inextricably a part of trial,” according to the opinion. “Rather, the question amounted to a preliminary argument regarding a disputed question of fact. This type of questioning during voir dire is generally not permitted.”

The defense claimed all three women were prostitutes who agreed to provide a service and, when it was not fulfilled to the defendant’s satisfaction, were not paid. Encalado’s attorney wanted to ask potential jurors if they could fairly consider evidence about prostitution: “Would that fact alone prevent you from being fair to either side?”

The trial court did not allow the question. The 1st District Appellate Court reversed Encalado’s convictions on appeal — with Justice Mary Anne Mason dissenting — and remanded for a new trial.

Mason wrote in her opinion that if the defense was permitted to ask the proposed question, jurors “would have been left with the impression, as Encalado undoubtedly hoped, that the victim was a prostitute.” Allowing such a question, Mason continued, would allow defendants in similar cases to “circumvent” the rape shield statute.

In its opinion, the high court instead relied on the same case the appellate court did to reach a different conclusion.

That case, People v. Strain, focused on whether the defendant in a murder case believed to be related to gang activity was entitled to question potential jury members about their ability to fairly judge information related to gangs.

The Supreme Court ruled in part that because Illinois law makes note of the fact gang activity is viewed negatively by members of the public, that question should be allowed.

“The same concerns regarding the prejudicial effect of gang violence dictate our holding that, when testimony regarding gang membership and gang-related activity is to be an integral part of the defendant’s trial, the defendant must be afforded an opportunity to question the prospective jurors, either directly or through questions submitted to the trial court, concerning gang bias,” the Supreme Court wrote, quoting Strain.

In this case, because “there is no body of law that holds that the testimony of patrons of prostitutes is treated with skepticism by the public,” the voir dire process in Encalado’s trial was not unfair. The justices also found that allowing the question to be posed to potential jury members would help the defense introduce part of its argument, which is a “disputed issue of fact.”

Bontrager said the Office of the State Appellate Defender is “disappointed” with the decision.

“We had hoped that the court would recognize, as the appellate court did, that asking a question in voir dire such as the one posed here would have assisted both sides in ensuring that a fair jury heard the case,” she wrote in an e-mail.

Annie Thompson, a spokeswoman for the attorney general’s office, said in a statement that they are “pleased with the decision in that it provides further clarification of the voir dire process to ensure the removal of jurors who are biased or unable to be impartial.”

The state was represented by Assistant Attorney General Evan B. Elsner.

The case is People of the State of Illinois v. Theophil Encalado, No. 122059.