Published by the Scripps Howard Foundation Wire on Sept. 18, 2015 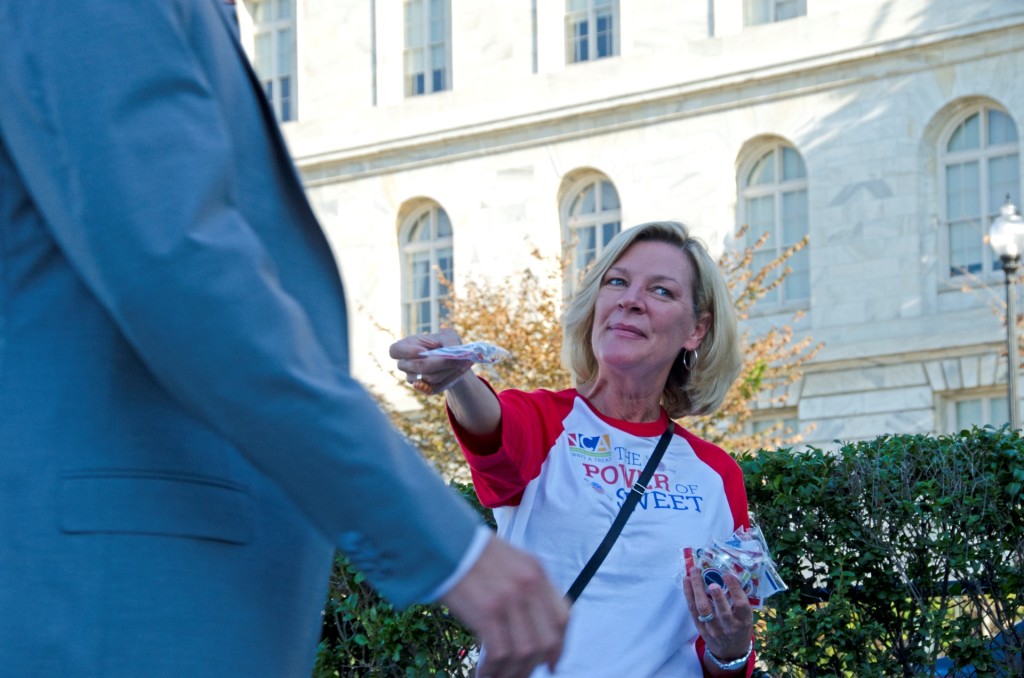 WASHINGTON – The U.S. candy industry has a problem.

The sugar it needs to produce sweet treats is protected by the government through tariffs and trade restrictions, which drive up the price, industry officials say. This has forced some companies to move  production to places where sugar is cheaper, including Mexico or Brazil.

Atkinson Candy Co. is one of those companies. Founded in 1932 in Lufkin, Texas, the family-owned maker of Chick-O-Stick, Coconut Long Boys and other brands moved its production of Mint Twists to Guatemala in 2010.

The candy has a high sugar content, Marketing Director Sarah Atkinson said, and, “There was just no way to stay competitive manufacturing it in the U.S. Going to market, we were just getting killed by peppermints made in China, made in Argentina, made in Brazil.”

Candy company executives from across the United States are on Capitol Hill this week to discuss industry concerns with their representatives in Congress as part of an annual Washington forum hosted by the National Confectioners Association.

NCA had staffers distributing candy to commuters at the Capitol South Metro station Thursday morning and later hosted a press conference at the Newseum to announce the results of a report it commissioned about the candy industry’s impact on the economy. Called “The Power of Sweet,” the report found that for every confectionery job created, an additional seven jobs are supported in related industries, collectively employing 465,000 people.

Sen. Kelly Ayotte, R-N.H., promised at the press conference that she would continue working to eliminate the “wasteful spending … of sugar subsidies.” Swiss chocolate maker Lindt & Sprüngli has its American plant in New Hampshire.

House Minority Whip Steny Hoyer, D-Md., said “there is no excuse” for Congress not reauthorizing the Export-Import Bank in July. The bank assists private companies to make international sales. He urged the candy industry officials to speak to their representatives in Congress about the subject.

The American government employs trade restrictions and tariffs to guarantee domestic sugar growers a price of 33.13 cents per pound of sugar, according to the Department of Agriculture. This practice is included in the farm bill, a piece of legislation President Obama likened to a Swiss Army knife because of its many other components.

Many candy makers blame these policies for their need to outsource and have been working for years to get Congress to repeal them.

American Sugar Alliance spokesman Phillip Hayes said he agrees the sugar industry does not need the current policy of tariffs and trade restrictions, but only if sugar competed on a global free market. Other governments, including those in Brazil, India and Thailand, heavily subsidize their sugar industries, making the price of their exports much lower than those from the U.S.

If the protections were removed before a free market was established, Florida State University economics professor Randall Holcombe said, a lot of sugar producers would go out of business.

The sugar industry tried to team up with the candy industry to advocate for this option, Hayes said, but the confectioners were not interested because “this is really about driving the price of U.S. sugar down.”

The price of sugar is about the same as it has been for the last 30 years, according to the American Sugar Alliance, so the candy industry is actually not spending as much as it thinks it is when taking inflation into account.

And Hayes said the data released at press conference Thursday reflects how well the candy industry is operating with the current policies in place.

Many candy makers, though, said the industry could maintain more American jobs if the sugar protection policies were not in place.

“As long as major corporations and large lobby groups continue to wrap their collective fingers around the necks of our Senators and Congressmen,” Atkinson wrote, family-operated candy companies “will continue to disappear and all that will be left are greedy, manipulative, impersonal, and cold-hearted corporations.”

Reach reporter Rebecca Anzel at rebecca.anzel@scripps.com or 202-408-1489. SHFWire stories are free to any news organization that gives the reporter a byline and credits the SHFWire. Like the Scripps Howard Foundation Wire interns on Facebook and follow us on Twitter.