Published by the Scripps Howard Foundation Wire on Nov. 24, 2015

Republican presidential candidate Chris Christie talks foreign policy at the Council on Foreign Relations on Tuesday. He covered topics from the Islamic State group and Syria to trade policy and immigration. SHFWire photo by Rebecca Anzel.

WASHINGTON – New Jersey Gov. Chris Christie reminded a room full of foreign policy experts of his seven years experience as a U.S. attorney in an attempt to set himself apart from the other 13 Republican presidential candidates.

Speaking to the Council on Foreign Relations, he criticized President Barack Obama’s refugee program, characterization of the Islamic State group and lack of leadership and stressed the importance of preventing another domestic terrorist attack like that of Sept. 11, 2001.

“The goal and the intent of the American president has to be, first and foremost, to prevent another generation of those widows and orphans on American soil,” Christie said Tuesday. “That must be your top priority and your first priority as president of the United States.”

It is for this reason he said he is not in favor of the U.S. accepting Syrian refugees.

Christie was quick to point out that Chertoff and Rice are not currently in a position of responsibility “for ensuring the safety of the American people.” His position would not change, he said, until FBI Director James B. Comey says the refugee vetting process is secure. 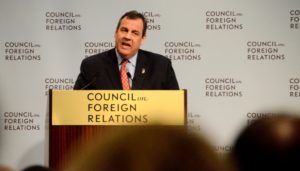 New Jersey Gov. Chris Christie says he will revisit his decision not to accept Syrian refugees in his state when FBI Director James B. Comey says the agency is able to vet them. SHFWire photo by Rebecca Anzel.

Comey has opposed a bill in Congress that would require the FBI director to personally certify that refugees are not security threats.

“When the FBI director stands up and says that he cannot assure the American people that Syrian refugees can be effectively vetted, that ends the conversation for the moment,” Christie said.

The FBI is one of several agencies that investigates potential refugees in a process that takes up to two years. The departments of State and Homeland Security are also involved.

This topic gained a lot of attention last week after a series of terrorists attacks in Paris. Christie criticized Obama’s characterization of the group – the president on Sunday called ISIS “a bunch of killers with good social media.”

“I would be fascinated to see the president go to Paris and speak to the families who lost their loved ones 12, 13 days ago and tell them that ISIS is just a group of killers who are good at social media,” Christie said.

The fight is a personal one for him. He recounted his experience on 9/11 – worrying for his wife’s safety and what he would tell his children if anything happened to her – and the experience of one of his neighbors who died that day. Christie’s wife, Mary Pat, worked two blocks from the World Trade Center.

“Terrorism is not theoretical to me,” he said, expressing his frustration that the Obama administration is downplaying ISIS’s influence. “It’s real. I see it in the eyes of people in my state every day.”

Christie recommended diplomatic, military and intelligence operations with NATO; increased work with the U.S.’s Arab allies; and a conservative relationship with Russian President Vladamir Putin. But he also said he would warn the American public about the amount of time it will take to calm tensions in the Middle East.

“We also need to be honest with the American people that because of this situation we’ve inherited, that this is going to take a very long time,” he said. “This is not going to be something that’s going to happen overnight. It just isn’t.”

Christie touched on the media criticism he has received throughout his campaign, but he said he believes he can fix the American people’s wavering support of Washington.

“I manage what I call lovingly an unruly state. There’s nothing that’s ever easy in New Jersey,” he said. “But you can walk through that fire and come out on the other side if you stick by your principles.”