Published by the Scripps Howard Foundation Wire on Sept. 23, 2015 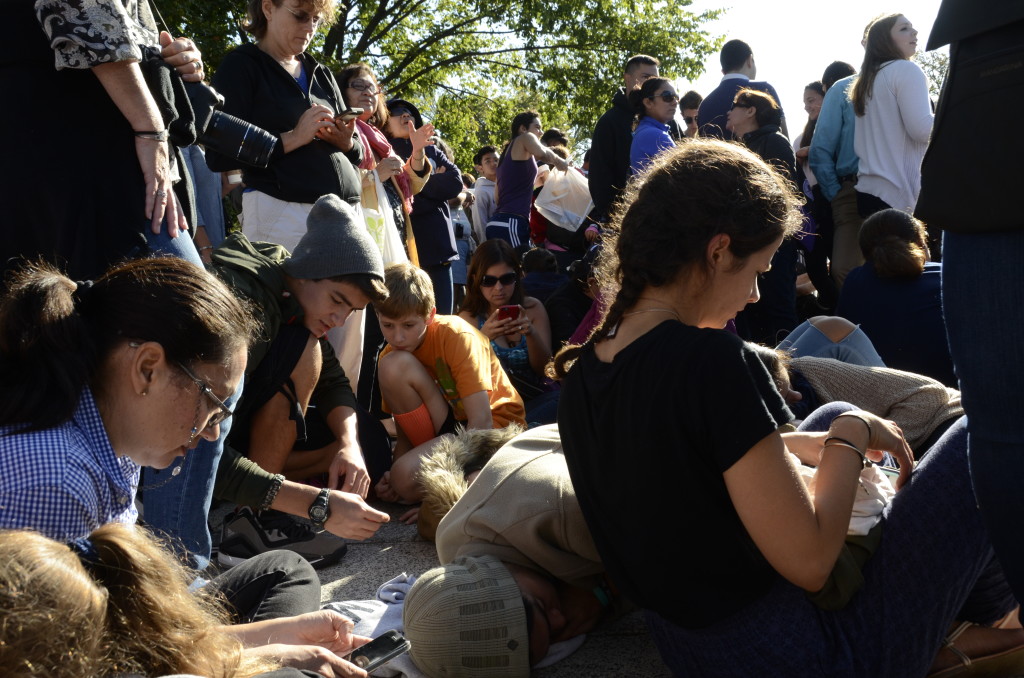 Before Pope Francis drove down Constitution Avenue to greet parade-goers, people kill time by eating snacks, checking phones and taking naps. For some, the wait was more than seven hours. SHFWire photo by Rebecca Anzel.

WASHINGTON – Throwing her arm around her good friend’s neck, Cecilia Allen, 47, laughed conspiratorially about skipping school to see the pope.

“We’re skipping lesson plans and everything,” she said. “My birthday is tomorrow, I’ll be 47, so this is my treat to myself.”

Allen is a French teacher at H-B Woodlawn in Arlington, Va. Her friend, Margaret Johnson, 40, is a Spanish teacher at Yorktown High School in the same city.

“I can call at 11 o’clock and say, ‘Hey what are you doing tomorrow? I’m going to see the pope and you’re coming with me,” Allen said.

Allen and Johnson were two of thousands of people who attended the brief parade Wednesday, watching Pope Francis make his way along the streets circling the White House South Lawn. The parade followed the arrival ceremony with President Barack Obama.

Pope Francis’ visit to the United States comes after a brief stay in Cuba, and after leaving D.C. on Thursday, he will continue to New York and Philadelphia.

Not all of the parade-goers came from D.C. or the surrounding areas. For some, it was a journey of  hundreds of miles.

Gru Tejeda, 40,who works in criminal justice, had to plan her roughly 1,400 mile voyage from Houston, carefully, she said. She left at 6 a.m. Monday and arrived in D.C. at 9:30 the following night. She said she made the trip mainly because her mother, Socorro Soriano, 59, was eager to see Pope Francis.

Sylvia Zimmer, 28, a kindergarten teacher, and Sebastian Brand, 35, a welder, were in Philadelphia when they heard the pope would be in D.C. The residents of Chemnitz, Germany, made a detour in their 11-day U.S. trip to see Pope Francis.

“It’s a once-in-a-lifetime chance to see him,” Zimmer said.

Despite the thousands of people drawn to the parade route, some said they were shocked the grounds were not more crowded.

Sue Winfield, 65, a nurse, from Fairfax, Va., said her drive into the city Wednesday morning on Interstate 66 took her about 20 minutes, which she said came as a surprise because of the way the news media “were talking about it, even yesterday.”

Johnson said she was also expecting more people to be at the parade. She said she found the security process was not as long as she thought it would be.

Some people lined up outside the parade’s security checkpoint as early as 3:30 a.m. in hopes of seeing the pope they believe is making a real difference.

“His job, if you think about it, is the welfare and the salvation of people. I think if he sees something that he thinks is a concern and is not the best for people, he is going to speak out,” Winfield said. “All you have to do is listen to him.”

An actress and musician, Christina Castellanos, 32, came from Somerville, N.J., to sell buttons, posters and T-shirts to commemorate the pope’s visit. She said she plans to donate the profits to her church, and the experience of seeing Pope Francis is one “that will last a lifetime” in part because of his positive effect on people.

“Especially in this world, it’s a lot of negativity, a lot of bad things going on,” Castellanos said. “It’s good to see people coming together, lots of smiles, a lot of love.”

Teachers Johnson and Allen spent a few minutes after the parade ended to flip through the photos they took. They gushed over one that shows the pope waving in their direction and other parade-goers’ hands straining toward the sky almost in a plea for Pope Francis to bless them with his touch.

“He’s like a common denominator. It’s a good message of peace and love and humility and we try to teach that in our classrooms.” Allen said. “The world is kind of in need of a pope like Francis.”